Yes, 80GB would be enough if you don't keep a lot of recordings online permanently.
Top

What kind of resolution and bitrate are you getting, anyway? And how much room does a 22-minute program take up at those settings?
Top

Since I have a big drive I don't do any transcoding except for flagging commercials so the shows I record are full size, about 2GB per hour. According to mplayer that's MPEG2 at 29.97 fps 6000 kbps on the video and audio is 48k 384k mp3.
Top

I have officially joined the MythTV crew. I must say, being able to pause live TV and stuff is completely awesome.

Now I just need to get a DVD burner and an IR blaster so I can change channels via mythtv.
Top

Cool, how did you get a capture card so fast? Which one are you using?
Top

Capture Card came out of a Windows machine that I never used much. It's a Happauge WinTV NTSC 62471 Rev A. Quality isn't the greatest, but oh well.

I have been having one problem though. After deleting recordings, I am never able to leave the "Delete Recordings" screen unless I close and reopen the frontend (from Terminal or ctrl+backspace)
Top

Maniaman wrote:Capture Card came out of a Windows machine that I never used much. It's a Happauge WinTV NTSC 62471 Rev A. Quality isn't the greatest, but oh well.

I have been having one problem though. After deleting recordings, I am never able to leave the "Delete Recordings" screen unless I close and reopen the frontend (from Terminal or ctrl+backspace)

Do you have a remote control configured? Is this a problem with the remote, directly within X or both? On the remote I just press either the left arrow key or the Back/Exit button to get out of that screen (just like all the other screens). On the keyboard I use either the left arrow key or the ESC key. Could your keymap be messed up or have a conflicting ESC/Left key binding somewhere?
Top

No remote configured yet, still need to get the IR receiver and stuff.

I have been hitting the ESC key to try to leave it, which works until I delete recordings.
Top

It also seems to want to start recording the second I select Watch TV now for some reason.

I have also come to the conclusion that I need a TV that supports S-Video. These converters that convert VGA to Composite suck.
Top

Hmmm, I've been having some problems of my own since I updated everything to the latest RPMS. My problem isn't with keys but with choppy video all of a sudden. I've got a few threads on it over here:

I might suggest you get on the MythTV Users mailing list and see if someone can answer your question there. I don't understand why you would be having the problem you are having. You can get on the list here:

Maniaman wrote: I have also come to the conclusion that I need a TV that supports S-Video. These converters that convert VGA to Composite suck.

Some (modern) TVs support S-Video over the Scart pins, but it's kinda pot-luck.
Top

I was playing around and built a couple of these serial port infra red receivers similar to this one: 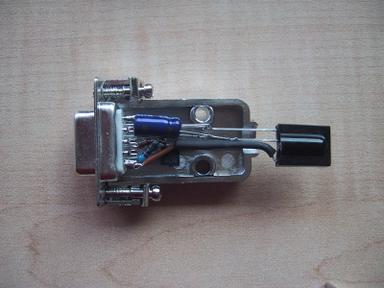 I built one with the IR module right in the housing of the serial port similar to the picture and the other I took the cord off of an old mouse and put the IR module at the end of the cord so you can place it wherever you need it for optimal reception from the remote. I didn't actually need an IR receiver because my PVR card comes with an IR receiver but my coworker needed one. I just decided to stop by Radio Shack on the way home and pick up the parts to build a couple in case he couldn't get his built.

I also thought I could use one on my laptop since I like to use it for a mobile MythTV front end. I thought the remote would just be an added touch to control the laptop with. Well, my laptop doesn't have a serial port but I had a USB->Serial connector which I figured I could use with the serial IR receiver. Nope, come to find out it won't work with the USB converter. Both of the ones I built do work though. I do have a serial port on the docking station and I tested them on a couple older laptops I have with serial ports. The serial versions only cost between 5 and 10 bucks to build and the USB version I think would be around 15 bucks or a little more. I have a remote control from an old Apex DVD player that I created a lircd config for that should work nicely as a MythTV controller.
Top

I wonder if the source code for that microprocessor is available online. If so all you would need is a pic flasher. If it is not, I may be able to assist. I have done some assembly programming for pics and my wife is an embedded software engineer so she has even more experience with that sort of thing.

For her senior project we created an ir/microwave parking lot system that tallied the cars entering and leaving and gave a pretty accurate estimate to how many cars were currenlty in the parking structure and how many spaces were left.

The actuall trickiest part was detuning the microwave sensors to only trigger on large objects (cars) so we did not get false positives from cats or pedestrians. Firmware stuff is pretty fun to do. It is a nice change sometimes from the higher level bs.
Top

That's pretty cool! There is a download for it here:

I believe it contains all the source needed. I just downloaded it but I am new at this stuff so I don't really know what's what. I am very interested in learning more about it though. Maybe you can take a look at that download and let me know what you think.
Top

Also, I stopped into Radioshack yesterday and picked up one of those electronics learning lab partially for me and partially for my son. My son is thinking about majoring in Electrical Engineering when he goes off to college so I thought this might get him a little taste of some electronics and see if he really is interested in it.

At any rate, while I was browsing I saw this "Microcontroller BASIC Stamp Kit":

Is this the same/similar thing to the prommer from that usbirboy project? I wonder if I could use it with Linux? What would you suggest me getting if I wanted to program my own chips, preferably under Linux, worst case being something that runs under wine?

I found this article interesting:

I have plenty of servos and gadgets from my R/C airplanes that I could use in geeky projects like that.
Last edited by Void Main on Wed Oct 18, 2006 12:31 pm, edited 1 time in total.
Top
Post Reply
46 posts